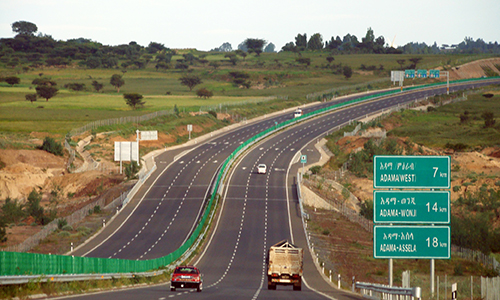 Addis Ababa – Adama Expressway is a new regime
of roads in Ethiopia, and indeed in Africa, that represents the current boldness and commitment in upgrading the nation’s infrastructure to meet the current growing demand for road capacity required
to support a growing economy.

ICS (formerly Scott Wilson Ethiopia) were contracted by the Ethiopian Roads Authority to undertake a feasibility study and detailed engineering design for a new tolled freeway from Addis Ababa, capital of Addis to the second biggest of Nazareth 80 km in south easterly direction of the capital. The project comprises of a divided 6-lane new road with over 6 interchanges and link roads to all major towns along the road, over 60 bridges including Roads
over Bridges and crossing of water structures, fencing throughout the length of the road, lighting and toll plazas.

The project route is seen as one of Ethiopia’s most important road links and serves as both a primary import-export route, accommodating the bulk of the commercial traffic from the east, southeast and southern parts of the country, and an important strategic access for traffic between the capital city and Djibouti Port, Ethiopia’s only current access to the sea.  The new Expressway, which is now open to traffic in September 2014, has relieved severe traffic congestion with substantially increased traffic capacity and reduced travel time.