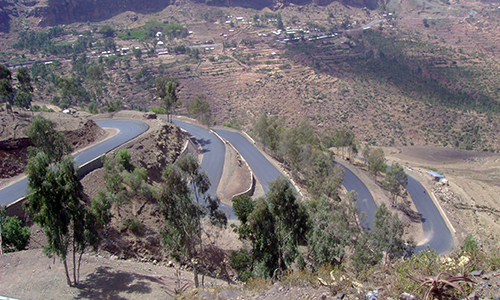 This is a World Bank funded project that involved road construction and rehabilitation works for the upgrading of a section of the road, approximately 108 kilometres in length, from Adi Abun to the western outskirts of Adigrat, from gravel surfacing to bituminous pavement.

The works construction was supervised using contract documentation prepared using World Bank standard documentation, based on the use of the FIDIC 4 Conditions of Contract.

Because the route of the road passes through some areas of

difficult terrain, there are sections of the road for which the contractor was unlikely to be able to provide diversion roads.

in which public traffic is halted during some key construction operations. In steep hair-pin stacks, conventional pavement construction was considered inappropriate and instead a

This road has contributed significantly to reviving the economy

of Tigray region of Ethiopia that suffered from decades of conflict and war.