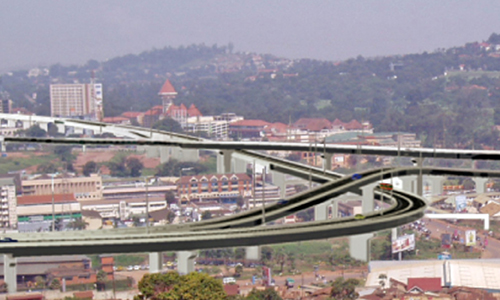 in traffic that have been a strain on the existing road capacity.

As part of measures to alleviate gridlock within the city, JICA commissioned a study in 2010 and later on updated in 2013 and 2014 to investigate options for alleviating chronic traffic jams in the Greater Kampala. Among others, this study recommended the the construction of two flyovers at Kitgum House and Clock Tower Junctions, widening of Mukwano Road, improvements of interfacing roads and junctions would be effective and feasible to achieve the mitigation of traffic congestion in GKMA. The proposed project also considered improvement of traffic safety for non-motorized transportation (NMT).

Based on the recommendation of the Feasibility Study, the Government of Uganda represented by UNRA has contracted Nippon Koei in JV with Eighth Japan Engineering Company (EJEC) and ICS to carry out the detailed design and tender assistance of the Kampala Flyover Project (Jinja Road – Mukwano Road – Queen’s Way) to be ensure the detailed design is prepared in time for the anticipated loan from JICA to finance the construction works.

The construction is expected to commence in 2016 and the road to open to traffic in 2019.