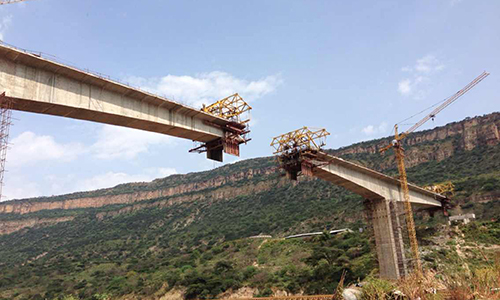 The route crosses the Blue Nile River and Gorge. The route section between Mekane Selam on the eastern plateau and Mertole Mariam on the western plateau of the Blue Nile Gorge is a new road based on the plateau section on the existing footpaths. The decent and ascent into and out of the Blue Nile Gorge passes through mountainous and escarpment sections which poses significant environmental as well as design and construction difficulties. The altitude drops from the plateaus to the gorge by 1100 metres, this relates to a drop of over 1000 metres over a short horizontal alignment.

The scope of work includes management of the design review and supervision of the works for both road and bridges throughout the entire construction phase, including the defects liability period.

Due to the steepness of the terrain, the weakness of some of the underlying marl and tuff horizons and the quantities of wet season rainfall, landslides, talus and colluvium slopes predominate in places. Landslides include slope failures in Black Cotton soils, large magnitude rock topples from cliff edges, deep-seated ancient failures and shallow movements in debris. Detailed assessments have been carried out as to the engineering geology of some of these areas for purposes of final alignment and earthworks design. Stability checks have been undertaken on retaining walls on hairpin stacks and in talus slope locations.